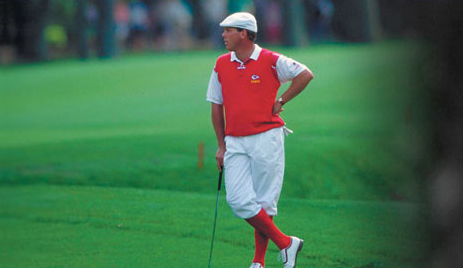 William Payne Stewart was born Jan. 30, 1957 in Springfield, MO, and attended Southern Methodist University in Dallas, TX. Popular and outgoing, Stewart began his pro golf career on the Asian Tour before earning his PGA Tour card in 1981. He won 11 tour events, including the 1989 PGA Championship and the US Open in 1991 and 1999.

Stewart played for the U.S. team in five Ryder Cup events and two World Cups. He was widely known for his wardrobe of traditional golf knickers or plus fours and a tam o’ shanter cap, making him an irresistible target for photographers around the world. Stewart was also known for his pure swing, sportsmanlike conduct and gentlemanly behavior.

His life was cut short barely a month after the U.S. team won the 1999 Ryder Cup in Brookline, MA, when the private jet, in which he and five others were flying, crashed in a field near Aberdeen, SD. Payne Stewart was 42 years old.

He was inducted into the World Golf Hall of Fame in 2001.